Competing ice arenas say the Vadnais Sports Center is siphoning off their customers in a limited market.

Two weeks ago, pee wee hockey teams had the honor of christening the ice at the Vadnais Sports Center with games and practices. Last week, soccer teams took to the turf under the state's second-tallest dome.

In the coming weeks and months, the new $26 million facility -- similar to Bielenberg Sports Center in Woodbury and the St. Croix Valley Recreation Center in Stillwater -- will host at least eight hockey tournaments sponsored by the White Bear Lake Youth Hockey Association. The center -- with two indoor ice rinks and a 100,000-square-foot domed fieldhouse -- also will serve as the new home for the White Bear Lake High School girls and boys hockey teams and the Minnesota Warriors, a hockey team for the disabled.

The Maplewood Figure Skating Club plans to skate there, too. And the adjoining fieldhouse will be used for lacrosse, volleyball, track and field, rugby and senior softball leagues, trade shows and school graduations.

"This is much more than just an ice arena," said Chief Operating Officer Mark Bigelbach. "This can be used for any number of things. We think this will be a destination. We will have just as much activity in the summer. It will be used 365 days a year."

What might be good business for Vadnais Heights worries neighboring cities, which are losing customers to the new arena.

Bruce Bates, rink supervisor at the nearby White Bear Lake Sports Center, said he's selling less ice time this year since the high school teams no longer practice or play games at his arena. He's filled some of that gap by selling ice time to youth organizations from Mahtomedi and Stillwater. But that in turn has affected the St. Croix Valley Recreation Center in Stillwater, where those organizations now are renting less ice time, said arena manager Doug Brady.

"I don't think they have created any more skaters," said Brady, who said he's also renting less dome time to senior softball players who soon will take their games to Vadnais Heights. "Things are now spread out."

Greg Mack, director of Ramsey County Parks and Recreation, said he doesn't know to what extent the Vadnais Sports Center will hurt the county's nine arenas (Biff Adams Ice Arena is idle this winter and could be used for curling or become a tennis center), but he said the new arena is drawing away Ramsey's business.

"They did not create any new customers. They are all our customers," he said. "They entered a saturated market. It's just a redistribution of customers."

Vadnais Heights officials hope their complex will improve the city's economy and "upgrade" the area at Hwy. 61 and County Road E., said City Manager Gerry Urban. Early projections call for 1.3 million participants and spectators to pass through the sports center's doors in the first year.

"When you bring in tournaments and games, dollars go into those communities," said developer Shannon Rusk, of Oppidan Investment Co.

It's easy to see why Vadnais Heights is fast becoming a big draw. The ice arena is loaded with scores of features, including electric-powered Zambonis, special team benches that will allow disabled hockey players to slide directly onto the ice, 12 locker rooms and a high-tech sound system. The dome can be split into thirds with dividers to allow for several activities at once.

"The facility is state of the art," said Jerry Kwapick, head girls hockey coach at White Bear Lake High School. "It's fabulous. I'm envious. We never had anything like that."

The city sold revenue bonds to pay for the project. Urban expects that rent and revenue from advertising and events will bring in more than $2.3 million, enough to pay the bills without tapping city money. However, as "master lease holder," the city and its taxpayers will be on the hook if the arena goes into the red. 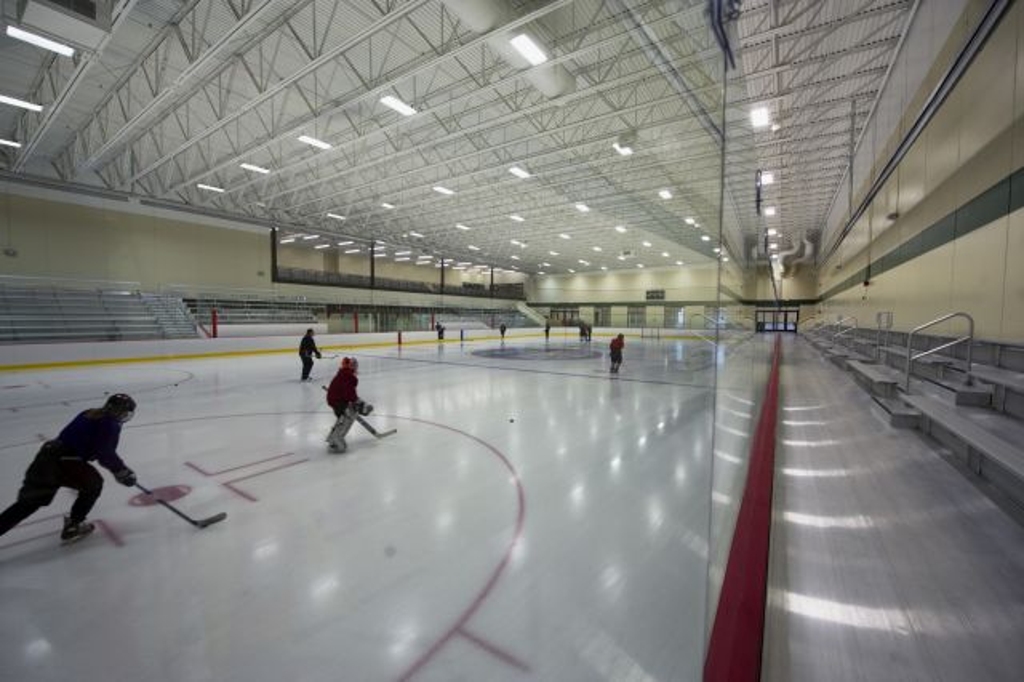 The White Bear Lake girl's hockey team practicing at one of the rinks at the new Vadnais Heights facility. David Brewster, Star Tribune