The purpose of the Minnesota Girls Hockey Coaches Association (MGHCA) is to promote the welfare of girls’ high school team coaches and high school girl athletes and their participation in hockey as players, officials, coaches and administrators. The association also promotes and administers development programs in order to increase participation in girls' high school hockey in the state of Minnesota and promotes those players wishing to play collegiate hockey. The MGHCA provides resources and continuing education for all high school coaches and promote sportsmanship and comradeship among all high school coaches throughout Minnesota.

Members of the MGHCA are comprised of current and past high school coaches, and those individuals who desire to support girls’ high school hockey through their membership as Associate Members. All Head and Assistant coaches are encouraged to become members of either the MGHCA or the Minnesota State High School Coaches Association (MSHSCA). Any individual who is a regular or associate member of the MGHCA is eligible to be nominated for the awards described below. Some of the awards are awarded through the MGHCA while many others are awarded through a coach’s participation in other areas outside of the regular MSHSL season.

In addition, the MGHCA sponsors many awards for its member coaches and provides opportunities for our coaches to be honored by other groups, such as the Minnesota State High School Coaches Association, The Minnesota State High School League, Minnesota Hockey, The American Hockey Coaches Association and USA Hockey.  We have listed the various awards below along with a list of the past award recipients.

The purpose of the Hall of Fame is to recognize and preserve the heritage of girl’s high school hockey in Minnesota and to keep alive the tradition and spirit of the great game of hockey.  This is also an opportunity to honor the people who through their distinguished achievement have been instrumental in the development of the game and devoted themselves to creating great opportunities for girls to play hockey in the state of Minnesota and beyond. Nomination information can be found on the MGHCA website, along with eligibility requirements:

The Brano Stankovsky Award is named in honor of the late long-time Blake School Head Coach.  It is given to one person annually who has provided leadership and support to the growth and betterment of high school girls hockey, the Minnesota Girls Hockey Coaches Association, or the programs administered by the MGHCA, the Minnesota State High School League or Minnesota Hockey.  Deserving individuals will have displayed dedication, selflessness and passion for any of the activities in which they are or have been involved with. The nominated individual may still be involved with any of these activities. The nomination deadline for each year is February 10th.

and return by email to: morrisgang@msn.com
or by US mail to:
MGHCA,

CRITERIA FOR SELECTION OF CANDIDATES

Past girls hockey recipients include Dave Palmquist from South St Paul. He was inducted into the MSHSCA Hall of Fame in October of 2019.

I. Statement of Purpose

Hall of Fame nominees shall include individuals who through distinguished achievement have excelled in one or more high school activity program sponsored by the League. These individuals may include athletes, fine arts participants, coaches, contests officials and adjudicators, contributors, athletic/activity directors, school administrators, and directors of music, speech, drama, debate, and the visual arts. All candidates for the Hall of Fame must be at least 35 years of age. They may be retired from their field or still active.

Hall of Fame nomination forms and instructions are posted on this web site in word and PDF formats.  www.mshsl.org

NATIONAL GIRLS and WOMEN IN SPORT DAY IN MINNESOTA

Minnesota's National Girls and Women in Sport Day event honors individuals, teams and organizations with awards in seven separate categories. Award recipients are nominated by schools, community organizations, recreation centers, and amateur and professional sports organizations. Details about the specific awards are below.

For individuals or organizations that have broken barriers, overcome challenges and/or strive to

For individuals or organizations that have broken barriers, overcome challenges and/or strive to provide athletic opportunities for girls and women of all races, all ages, and all levels of ability.

Past Winners from the MGHCA include Tim Morris and Tom Peart,

The Special Merit Award is presented to individuals who exemplify the highest levels of commitment to breaking barriers for girls and women in sport.

Past Winners with ties to the MGHCA include Jane Ring, Jill Pohtilla and Krissy Wendell-Pohl.

To nominate a deserving person go to http://www.ngwsd-mn.com/Nominate.html

Minnesota Hockey established the Ted Brill Award with great respect and fond memories of one of our most influential leaders.  It is presented annually to an individual who has at least ten years of service to any of the various player development programs (STP, HEP, High Performance/Selects, High School All-Star Series, etc.)

The Presidents' Award is given annually to those individuals whom the President of Minnesota Hockey feels have given exemplary service to the organization's efforts.

The prestigious Don Clark Award is presented by Minnesota Hockey to an individual who over a period of many years has been dedicated to the grassroots growth and development of youth hockey in Minnesota.

The Walter Yaciuk Award is presented to an individual who has demonstrated a consistent commitment and contribution to the education and development of USA Hockey coaches.

The Distinguished Achievement Award is presented to a U.S. citizen who has made hockey his or her profession and has made outstanding contributions on or off the ice to the sport in the United States.

The Wm. Thayer Tutt Award is presented to a volunteer who, during many years of service, has displayed selfless dedication to the enhancement of ice hockey at the grassroots level in the United States.

John Mariucci, the former coach of the University of Minnesota, was not only an outstanding college coach, but also a driving force behind the growth of hockey in the United States. In 1987, the AHCA created this award to honor a secondary school association coach who best exemplifies the spirit, dedication and enthusiasm of the "GODFATHER OF U.S. HOCKEY," John Mariucci.

Named after the famed Boston College coach, this award honors those people in the coaching profession who have contributed to the overall growth and development of the sport of ice hockey in the United States.

Named in honor of the former Brown University hockey coach and AHCA spiritual leader, this award recognizes an individual who loves the purity of our sport. Whether a coach, administrator, trainer, official, journalist or simply a fan, the recipient exemplifies Jim Fullerton, who gave as much as he received and never stopped caring about the direction in which our game was heading.

The Joe Burke Award was established in 1994 to honor those individuals who have shown great support and dedication to Girls/Women's hockey. Joe Burke has been an avid fan of Girls/Women's hockey since the late 70's. Joe Burke, a Dedham resident is a life-long hockey fan, who never actually played the game himself. He became hooked on the women's game when he attended the game vs. the University of New Hampshire and Boston College in 1978 at McHugh Forum. Since this game Joe was seen at every major Girls/Women's hockey event in the New England area. He is a true friend of the women's game and the people associated with it.

This award honors a member of the hockey community or college coaching profession who has contributed to the overall growth and development of the sport of women’s ice hockey in the United States through their enthusiasm, passion and selflessness.

Please take the time to recognize those individuals who contribute their time, talent and energy to make girl’s and women’s hockey so special here in Minnesota and around the country. It only takes a few minutes of your time to bring attention to those coaches, administrators, players and contributors who help maintain the excellence of our programs and to help grow the game. 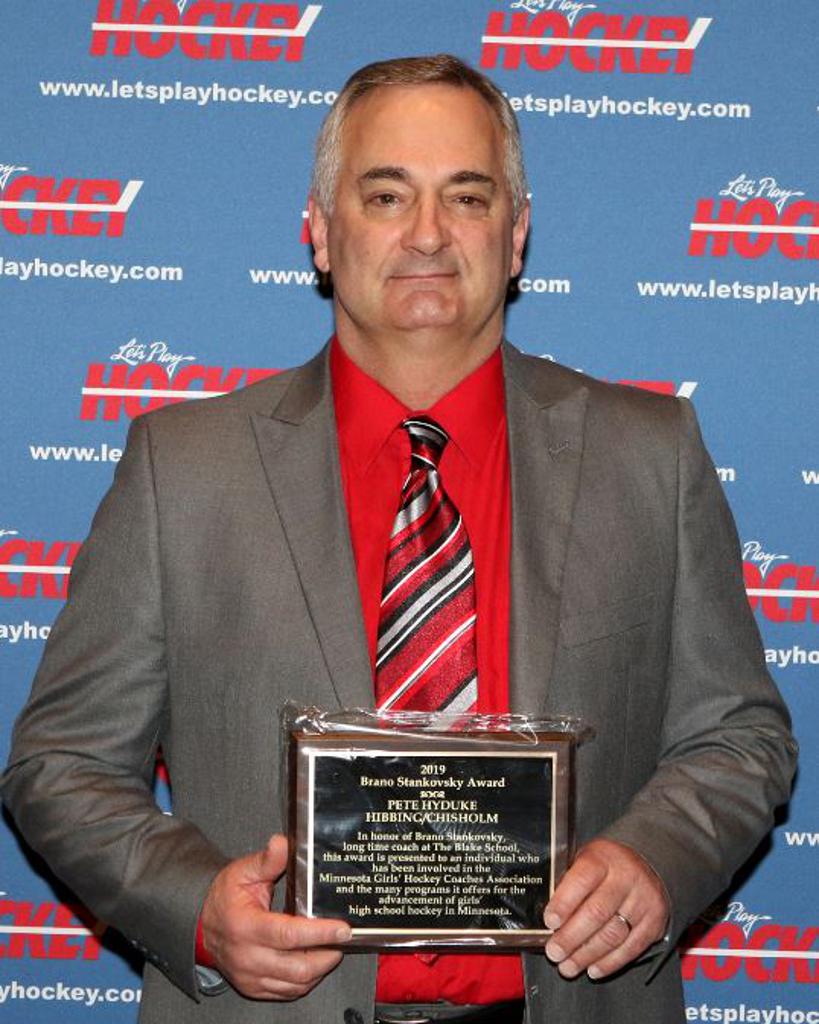 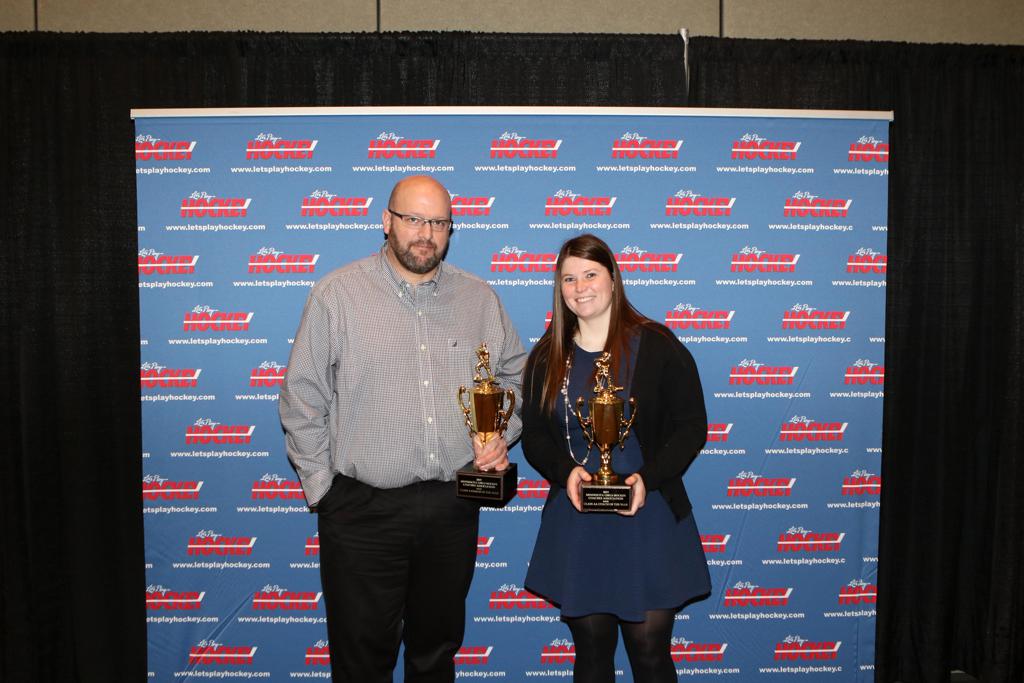